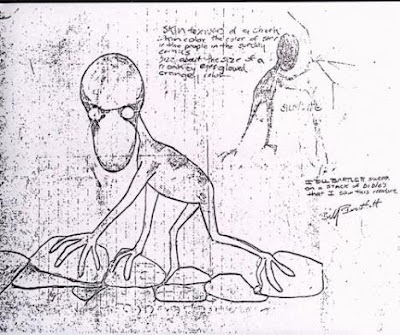 Sketch by eyewitness Bill Bartlett of the Dover demon, as featured in various newspapers during 1977 (Bill Bartlett-Wikipedia)

Here's a very interesting email that I've received from Heather at Atlas Obscura:

"Wanted to let you know about the third annual “International Obscura Day”, (www.obscuraday.com), a day of unusual local explorations, all over the world, presented by Atlas Obscura, an online travel guide to curious and unusual places. On April 28th, Loren Coleman, from the the International Cryptozoology Museum, will be giving a lecture [click here for details] to mark the 35 anniversary of the Dover Demon investigation."

"Thought you and your readers would be interested in it."

Thanks, Heather, for bringing this to my attention!

In case there are readers who are unfamiliar with the Dover demon, here is what I wrote about this intriguing entity in my book The Unexplained:


The last thing that 17-year-old Bill Bartlett expected to see when driving with two friends through Dover, Massachusetts, at around 10.30 pm on 21 April 1977 was a creature from another dimension. Yet that is what he may have done, at least in the opinion of some investigators - and judging from Bill's description of what he saw, they could have a point!

Driving along, his car's headlights suddenly illuminated a peculiar entity picking its way along a stone wall at the side of the road. As can be seen from the pencil sketch that Bill later prepared, which is reproduced here [see illustration opening this Eclectarium blog post], the creature had a disproportionately large head, shaped like a water melon, with two big, protruding eyes that glowed orange, but it did not seem to have a mouth, nose, or ears. Its body was small, its neck and limbs were long and thin, and its fingers and toes were slender and supple. The creature appeared to be hairless, but its peach-coloured skin was rough in texture. It stood 3-4 ft high, and was observed only by Bill (his two friends were not looking in the right direction to see it).

Unknown to Bill, however, his strange sighting would soon be substantiated by an entirely independent eyewitness. Less than two hours later, 15-year-old John Baxter was walking home little more than a mile from the locality of Bill's encounter when he saw a strange figure coming towards him. After receiving no reply when he called out to it, John paused, and as he did so the figure ran away down a gully. John chased after it, and when he was about 30 ft away, he could see it clearly, standing upright on its hind legs and gripping the trunk of a tree. When he spied its brightly glowing eyes in an otherwise featureless face staring at him, however, John decided to let caution supersede curiosity, and he walked briskly back to the road. Once he reached home, he too sketched the creature, and as can be seen here, his wholly independent drawing corresponds very closely indeed with Bill's.

At around midnight on 22 April, what Fortean researcher Loren Coleman would subsequently dub 'the Dover demon' was seen again, this time by 15-year-old Abby Brabham while being driven home by Will Taintor, 18, who only spied it very briefly. Abby's description matched those of Bill and John in every respect except one - when she observed it, its eyes were glowing green, not orange. And thus ended the curious case of the Dover demon - for it has never been reported again, and has never been satisfactorily identified.

If the descriptions of it are accurate, and they are certainly very consistent, the Dover demon does not resemble any species known to science, either from North America or elsewhere. It may not, however, be entirely unknown. The Cree Indians of eastern Canada speak of a mysterious race of pygmy entities called the Mannegishi, who delight in playing tricks upon travellers. According to the Cree, the Mannegishi have round heads, long thin legs, arms with six fingers on each hand, and they live between rocks in the rapids. Excluding the finger count discrepancy, this description is reminiscent of the Dover demon.