WHEN MY GREAT-AUNT SENT A FEATHERED MESSENGER TO SAY GOODBYE

Until now, my Eclectarium has remained closed throughout the present year, and this is why. Quite simply, 2013 has been the worst year of my life. It began with the deterioration in health of my dear mother, Mary Doreen Shuker, and continued with her passing away on Easter Monday, aged 92. She was my only family and the best person I shall ever know, and I shall miss her more than I can ever hope to convey in words every day for the rest of my life. I know that my mother took immense pride in my writings, so I am re-opening the Eclectarium today with a post that not only features her but is also dedicated to her. Thank you, little Mom, for your love, support, and faith in me throughout your life – may I be worthy of you throughout the remainder of mine. This is for you, Mom, with all my love, always.

According to traditional English folk-belief, birds will come to tell a person when a relative is about to die. However, not everyone is convinced that it is just folklore. The following remarkable incident involved members of my own family.

During the late 1960s, Miss Edith Griffin, my very elderly great-aunt, suffered a severe stroke from which there was no hope of recovery. Each day, her niece, my mother Mary Shuker, visited her at her home, which she shared with my maternal grandparents (one of whom was her younger sister Mrs Gertrude Timmins, whose recollection of a shower of frog rain can be accessed here on my ShukerNature blog). 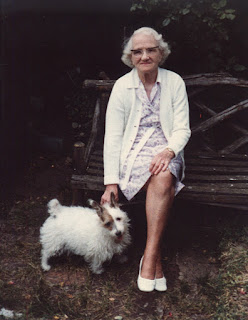 Back at our own house one night, after having spent the day with my great-aunt, my mother was unable to sleep, and lay awake in bed for some time. Suddenly, she heard a bird land on her windowsill and begin chirping loudly, even though it was now approximately 2 am the next morning and totally dark outside.

This continued for quite a time before the bird eventually flew away, leaving my mother feeling very ill at ease by this strange, unexpected visitation. So much so, in fact, that she called in at my grandmother's house just a few hours later, earlier than normal - where she learnt that my great-aunt had passed away, at around 2 am that morning.

Today I received an email from an American friend containing details of an extraordinary event from his own life that so closely mirrors the incident featuring my mother and my great-aunt described by me above that I am including it here as follows. Because of its very personal nature, however, I am not publicly releasing any details concerning my friend's identity, but I have retained them on file.

"On the day my mother passed away she had been in Hospice care for three days although she was not expected to make for 48 hours. Our whole family had come to her bedside on that first day. We had a family prayer time, my uncle Derrell (mom's youngest brother) an ordained Baptist minister led the prayer. After the first day it was my sister and brother-in-law and my wife and myself that took turns spending the night those last three nights. I returned home that morning after spending the night there and was trying to unwind a little before returning. I had just sat down in our living room when a small wren flew up under our porch and landed momentarily on the screen of our front window looking in at me. The minute after it flew away I received a phone call from my sister telling me mom had just passed away. I believe to this day that was a sign from heaven."

And perhaps it was.  In the words of the much-loved hymn composed by William Cowper:


God moves in a mysterious way
His wonders to perform;
He plans His footsteps in the sea,
and rides upon the storm.