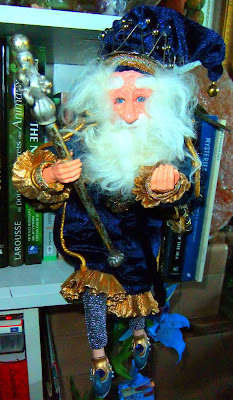 It is nothing if not timely today to blog about the most elusive crypto-primate of all. Glimpsed on only a single night each year, when it is usually seen clambering over roof tops and disappearing down chimneys, it is famed for its distinctive red and white pelage, profuse facial hair, rotund body form, readily recognisable ‘ho ho ho’ triple cry, predilection for sherry and mince pies, and unique symbiotic relationship with reindeer.

Or, to phrase it another way, certain books of mine, most notably The Unexplained, Mysteries of Planet Earth, and Dr Shuker’s Casebook, have shown that my interests in mysteries and legends are not entirely limited to those of the cryptozoological and zoological varieties. Indeed, I have plans for another casebook, which, with stunning originality, will most probably be entitled Dr Shuker’s Second Casebook, and will include the following festive preview. Happy Christmas!

SANTA CLAUS - THIS IS YOUR LIFE!
The exchanging of gifts is an intrinsic part of the Christmas celebrations, a popular tradition dating back to the very first Christmas, and even earlier - when the Romans offered tributes during the late December festival of Saturnalia, which Christmas replaced.

Today, the personification of gift provision at Christmas is Santa Claus. Nevertheless, this jolly red-suited, white-whiskered, rotund figure with a zest for ho-ho-hoing, reindeer roof-riding, and chimney-descending as he delivers presents to children is only of fairly recent origin - the modern-day product of many fascinating transformations and identity mergings down through the ages.

Indeed, Santa the gift-bringer most probably began life as we know him as a god - Odin (Woden), the chief deity of the Norsemen or Vikings. They believed that during December, Odin descended to earth in a chariot drawn by goats, or riding his famous eight-legged steed Sleipnir, temporarily deserting Asgard - heavenly abode of the gods - in order to bring gifts to his loyal human worshippers, thus helping to sustain them during the bleak, icy weather characterising winter in northern Europe. Odin typically wore a long blue hooded cloak, and possessed a profuse white beard - features retained in slightly modified form by his successor, Father Christmas.

In an attempt to limit the worst excesses of winter and to placate this fearful embodiment of Nature, later Scandinavian traditions involved nominating someone in each community to personify Winter. This fortunate person would then find himself invited to everyone's home, where he would be richly regaled with food and drink in a symbolic effort to pacify Winter.

Although, after having ingested and imbibed at a succession of houses, Winter's human ambassador was undoubtedly rendered exceedingly passive (if not entirely prostrate!), whether the same can be said for Winter itself is another matter entirely. Nevertheless, the custom proved popular, and travelled far, eventually reaching the British Isles, where the person representing Winter became known as Father Christmas.

Paradoxically, therefore, Father Christmas originated not as a giver but as a receiver of gifts. All this would change, however, courtesy of a much-loved archbishop from Myra in what is now southwestern Turkey. He lived from 280 AD to 6 December 345 AD, and was later canonised - becoming the patron saint of many diverse people, including boys, pawnbrokers, dockers, coopers, brewers, unsuccessful litigants, unmarried women, and sailors, as well as the inhabitants of Aberdeen and Russia. His name? St Nicholas.

Some of Santa Claus's most enduring traditions stemmed from the life or legends associated with St Nicholas. These included his bringing of gifts, because St Nicholas was well known for his great generosity. Moreover, he allegedly saved the three daughters of a poor man from being sold into prostitution by secretly throwing pursefuls of money into their house through an open window. One of these purses accidentally fell into a stocking that had been hung up to dry after being washed, which gave rise to the custom of putting out stockings at Christmas to be filled with gifts by Santa.

The celebration of St Nicholas became very popular in Europe, but especially so in Holland, where he was called Sinter Klaas. During the early 1600s, Dutch settlers established colonies in North America, and took their traditions of Sinter Klaas with them. Here they flourished, giving rise to a new Yuletide gift-giver, who became known as Santa Claus. 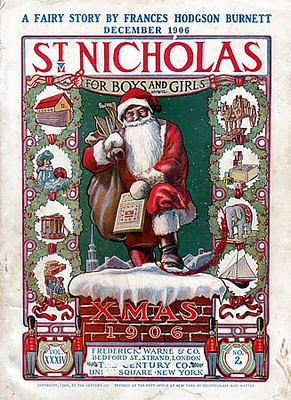 In Britain, meanwhile, Father Christmas reigned supreme, but also more sternly than his New World counterpart. For although Father Christmas ultimately became a gift-giver too, according to British custom he only gave gifts to good people, and he (or a helper) carried a cane for punishing those who had been wicked during the year.

Elsewhere in Europe, other gift-givers had also appeared on the scene. In Germany, for instance, Father Christmas is merely a messenger, communicating children's requests for gifts to Heaven - it is the Christ Child (Kriss Kringle), an angelic fair-haired child dressed in white, representing Jesus, who brings the gifts. Spanish children, conversely, receive theirs directly from the Three Kings; whereas in Russia a grandmotherly figure called Babouschka does the present-providing honours.

In southern Italy, a broomstick-riding woman called Befana drops presents down the chimney of every house on 5 January in the hope that one of them will be received by Jesus - to whom she did not give a present when He was born. This was because she was so busy sweeping her home with her broom that she was too late to visit Jesus before Mary and Joseph fled Bethlehem with Him to escape King Herod. 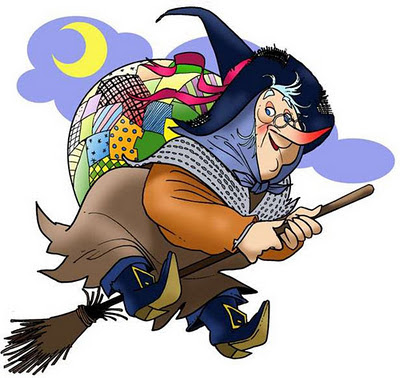 A modern-day cartoon representation of Befana, who is often depicted as a broomstick-riding witch-like figure more befitting of Hallowe-en than Christmas!

As for America: the evolution of today's Santa Claus continued apace with the penning in 1822 by a New York languages professor called Dr Clement Clarke Moore of his now world-renowned poem 'A Visit From St Nicholas', with its famous opening line: "'Twas the night before Christmas". This magical poem contained many of Santa's modern-day attributes, including his plump jolly form, vigorous laugh, sack of toys, reindeer-drawn sleigh, and his inimitable mode of entry into a house via the chimney.

In 1863, Harper's Illustrated Weekly published the first in a classic series of Santa engravings by Thomas Nast, who bestowed upon him an even more rotund, bewhiskered, beaming, toy-laden image. This transformation was completed during the early 1930s by a highly influential Coca-Cola advertising campaign, starring a jovial red-robed Santa skilfully designed by artist Haddon Sundblom. This rapidly became the definitive Santa Claus, delighting generations of children ever since - and not only in the U.S.A.

Just over a century ago, Christmas commercialism in America began to cross the Atlantic, infiltrating Europe and thus bringing the New World's legendary gift-giver with it. Inevitably, Britain's Odin-descended, blue-cloaked, hooded Father Christmas and St Nicholas's red-garbed, nightcap-wearing Santa Claus eventually merged into one. Indeed, many people today assume that these are merely alternative names for the same person - blithely unaware of their entirely separate origins.

Although, from a strictly historical perspective, this is undoubtedly a sad situation, I very much doubt that there will be many children eagerly anticipating the arrival of a certain sleigh-riding visitor this Christmas Eve who will worry too much about which name they should call him by - as long as he has brought with him a sackful of presents!