GROW YOUR OWN HOMUNCULUS 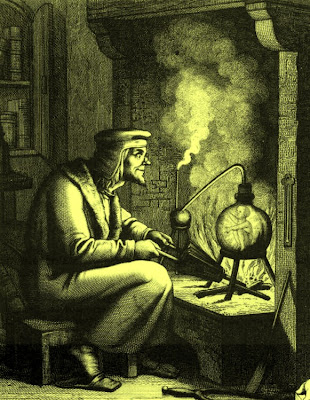 Creating a homunculus via alchemy

Even today, the alchemists of medieval times remain famous for their supposed (but unconfirmed) ability to transmute base metals into gold, using the fabled philosopher's stone. Less well-remembered, yet even more controversial, is their alleged artificial creation of tiny living humanoids - known as homunculi. Some references to homunculi in alchemical texts featured them as symbolic rather than literal. For instance, the fabled Philosopher's Stone is sometimes considered to be a homunculus, with its creation no less than the representation of the Great Work (Magnum Opus) process, merely described in a different way. 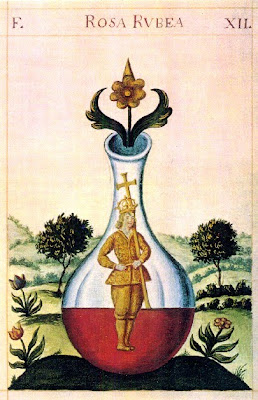 A symbolic homunculus, depicted in The Pretiosissimum Donum Dei ('The Most Precious Gift of God'), an important 15th-Century alchemical work by Georgius Aurach de Argentina

In September 1994, however, Paul Thompson published an engrossing review of this largely-forgotten arcane subject in America's Fate Magazine that contained some remarkable revelations regarding the alleged creation of living homunculi, and which inspired my own ongoing fascination with this subject.

Alchemists claimed that the culture medium required for the growth of homunculi contained several biological fluids such as sputum or egg-white, and sometimes inorganic fluids like dew, but the two substances most commonly cited as essential were human blood and semen - both of which are widely believed in primitive or non-scientific societies to harbour the vital essence of life. Also required was horse manure, whose heat-releasing properties were utilised to incubate the medium.

Bearing in mind that all of the above ingredients are readily obtainable, why was the production of homunculi a skill restricted to alchemists? The answer is that the recipes always seemed to contain one vital ingredient that was exceptionally complex and difficult to prepare. 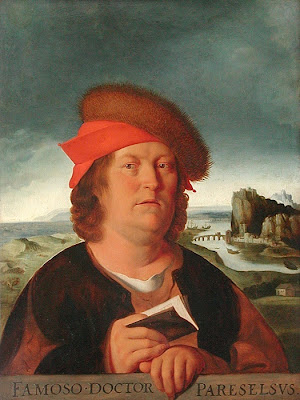 For example, in the homunculus recipe contained within the treatise De Natura Rerum, written by 16th-Century Swiss scholar and alchemist Theophrastus Paracelsus (aka Philippus von Hohenheim), 'the arcanum of human blood' was included - essential but esoteric, its constituents known only to the alchemical fraternity. Here, just in case any reader wishes to attempt it himself, is Paracelsus's description of how to create a homunculus:

"Let the semen of a man putrefy by itself in a sealed cucurbite [glass vessel] with the highest putrefaction of the venter equinus [horse manure] for 40 days, or until it begins at last to live, move, and be agitated, which can easily be seen. After this time it will be in some degree like a human being, but, nevertheless, transparent and without body. If now, after this, it be every day nourished and fed cautiously and prudently with the arcanum of human blood, and kept for 40 weeks in the perpetual and equal heat of a venter equinus, it becomes, thenceforth, a true and living infant, having all the members of a child that is born from a woman, but much smaller. This we call a homunculus; and it should be afterwards educated with the greatest care and zeal, until it grows up and begins to display intelligence."

Equally obscure is 'animal tincture', listed in another medieval recipe.

The vaguely human-looking root of the mandragora or mandrake plant Mandragora officinarum inspired the false belief during medieval times that it could be utilised in the production of homunculi. During his body's last convulsive spasms before death, a hanged man will sometimes ejaculate semen, and it was said that where this fell to the ground, a mandrake would grow. If its anthropomorphic root was then pulled out before dawn on a Friday morning by a black dog, then washed, and nurtured with milk, honey, and sometimes human blood too, the root would subsequently develop into a homunculus, which would guard and protect its owner. 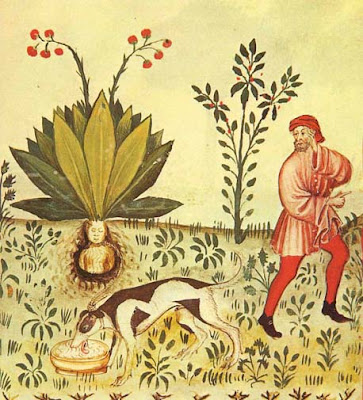 An even more exotic recipe for growing your own homunculus was cited during the 1700s by no less a figure of learning than Dr David Christianus from Germany's Giessen University. According to his claim, an egg should be taken from a black hen, and a tiny hole should be poked through its shell. A bean-sized portion of the albumen then needed to be removed and replaced by human semen, after which the egg's opening should be sealed with the hymen from a virgin maiden. Once this was accomplished, the egg must be buried in dung during the first day of the March lunar cycle. After 30 days, a homunculus should emerge from the egg, and as long as its owner provided it with a regular diet of earthworms and lavender seeds it would protect him and assist him in all of his endeavours.

Notwithstanding the inherent difficulties in obtaining the necessary ingredients and in performing the intricate series of processes required, records detailing the successful culturing of homunculi do exist. An extraordinary specimen grown from distilled human blood and able to emit beams of red light was reputedly cultured and exhibited at the court of France's King Louis XIV by royal physician Dr Pierre Borel. 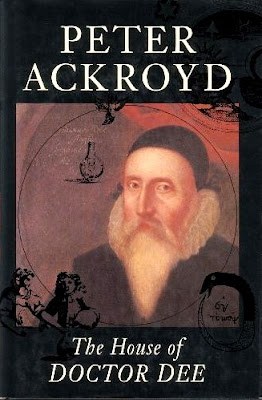 Homunculi feature in many contemporary novels including Peter Ackroyd's The House of Doctor Dee (1993), in which he portrays real-life Elizabethan magus John Dee successfully creating a homunculus

Like all homunculi, they were grown in sealed jars (homunculi die if exposed for any considerable period to the air), filled with water and eventually buried under heaps of manure. These were treated (as usual) with some special, but unspecified, solution, and doubled the size of eight of the homunculi, producing a series of 1-ft-tall specimens.

No two homunculi looked the same, and to each was fixed an identity. Eight were physical manikins, known respectively as the king, queen, knight, monk, nun, seraph, miner, and architect, and clothes pertinent to their identities were manufactured for them. Each of these eight homunculi was fed with special pink tablets every 3-4 days, and their water was changed once a week. On at least one occasion, the 'king' homunculus escaped from his jar, and was earnestly trying to remove the seal on the jar housing the 'queen' when he was spotted by Count Kufstein's butler, Klammerer. Chased by Kufstein and Klammerer, the 'king' soon fainted from exposure to the air, and was put back inside his own receptacle.

The remaining two homunculi were non-corporeal, and only appeared when Geloni tapped their jars and chanted certain magical words. A face would then materialise in each of them; moreover, in one the liquid would turn blue, in the other it would turn red. The red 'spirit' homunculus was fed on blood, and its water was changed every 2-3 days, but the blue 'spirit' homunculus was never fed and its water was never changed.

All ten homunculi would answer questions concerning future events, invariably predicting correctly the outcomes, and they were observed by many people. These included some very notable personages, like Count Franz Josef von Thun and Count Max Lamberg. Surely, however, such bizarre man-made entities could not really have existed - or could they?

I cannot help but wonder whether these particular homunculi were nothing more than large amphibians brought back by travellers from the tropics. One likely candidate is the African clawed toad Xenopus laevis, a common species vaguely humanoid in shape, which lives permanently in water - explaining why the 'king' fainted soon after escaping from its jar? 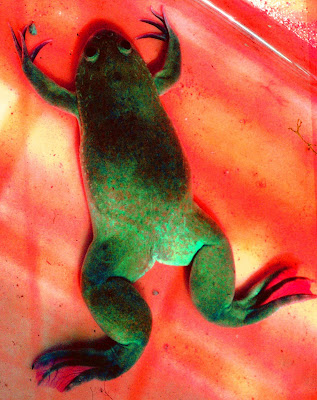 Homunculi – created from blood, or merely specimens of the African clawed toad (like this one)? (Michael Linnenbach/Wikipedia)

No-one knows what happened to nine of the homunculi after Geloni and Kufstein ultimately went their separate ways. However, an event occurred that may actually have left behind some tangible evidence of the tenth. Once, the jar containing the 'monk' homunculus was accidentally dropped, smashing as it hit the floor and killing its humanoid inhabitant. His body was afterwards buried in the grounds of Kufstein's Tyrolean residence - but where is this today? If only we knew its locality, the soil around it could be sifted, as suggested by Paul Thompson - and who knows what remains might be found?

One thing is certain. If a 12-in-long skeleton is ever found under these circumstances, Thompson would be very interested to learn more about it - and so would I.

A greatly-expanded, updated version of this article, emphasising its potential (crypto)zoological aspects, can be accessed here on my ShukerNature blog.


This article is extracted and expanded from the homunculus section of my book The Unexplained: An Illustrated Guide to the World's Natural and Paranormal Mysteries (Carlton: London, 1996)