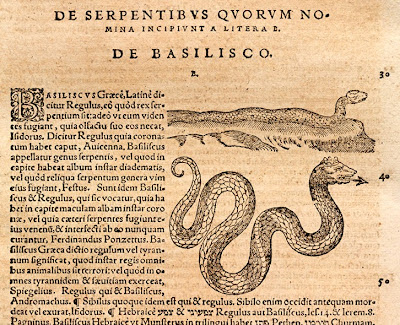 Back in medieval times, the basilisk was one of the most feared beasts that never existed. This fictitious creature was widely if erroneously believed to be real - a greatly-dreaded monster originally likened to a modest-sized snake or short-limbed lizard, but bearing a regal crown upon its head, and able to move forward with much of its body held erect, yet so toxic that the merest glance from its radiant eyes brought instant death to those who beheld it, the merest waft of its noxious breath shrivelled every living thing for miles around, and the merest dribble of venom from its fanged jaws poisoned for untold ages to come the very dust of the earth upon which it fell.

During the course of countless retellings of legends and lore concerning this reptilian horror down through the generations, its appearance became conflated with that of another imaginary creature, the cockatrice, sequestering from this latter monstrosity its rooster-like coxcomb, wattles and beak, a pair of sturdy spurred legs, and an ear-splitting crowing cry. Only a weasel or the rue plant (see image below) could combat the basilisk's lethal powers, and it left terror and destruction in its virulent wake. 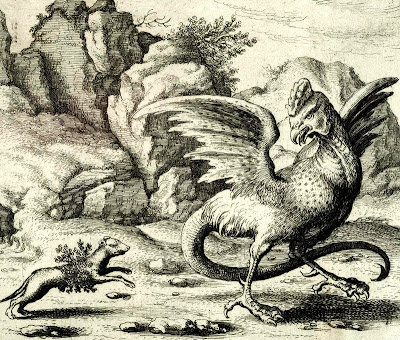 All in all, therefore, this was hardly a creature that readily elicited sympathy, and yet...

The January 1997 issue of a wonderful magazine called The Dragon Chronicle contained an outstanding short story entitled 'The Caprice', written by my old friend and cryptozoology colleague Richard Freeman, which revealed a very different, surprising side to the feared and hated basilisk, and which so captivated me when I read it that I've remembered it vividly ever since.

So now, with Richard's kind permission, I have pleasure in reprinting 'The Caprice', which I hope that you will enjoy as much as I did when I first read it, and still do today.


THE CAPRICE - by Richard Freeman

What would one call a creature that devoured colour? A chromatavore perhaps? It seemed to Edgar that his quarry had the ability to drain away more than just life. For six miles now all he had seen was varying shades of grey. The dead grass, the withered husks of trees and the twisted rocks. His mount had screamed and foamed at the edge of the desolation. Rearing up in wild eyed panic. So he left it and continued on foot.

He soon cast off the heavy armour, it would afford him little protection against his foe. He carried no sword or spear, the necromancer had warned him of that folly, "so bloated with venom is this serpent that, should a mounted man strike it down with a lance, the poison would travel up the weapon killing both man and horse."

Edgar shuddered, but from the memory of he who had sent him on this errand, rather than from the monster's power. He feared Silas Rasp more than the thing at the heart of the desolation. Barely five feet tall his bald head was unnaturally round and chubby. His oily skin was porcelain smooth and taken with his pot belly and pudgy fingers gave him the appearance of an outsized baby.

"One glance is death," he had hissed, fat tongue protruding toad-like through rubbery lips. "Yet it is such a rare and magical beast that its body parts have, shall we say, certain properties."

His eyes like pips of jet with a hunger it was disquieting to see, "About its wattled neck sprout green feathers. Spells committed to parchment with a quill made from these feathers increase ten fold in potency. Slay the serpent and pluck it like a goose."

So it was not to save the beleaguered land he had sallied forth. Rather in answer to the pull of the gold that glittered in Rasp's sweaty palms.

The cadavers of a man and a mule lay at the road side. They shared the same rigid horror on their glazed eyes. Ugly swarms of blow flies were contesting ownership of the corpses. Edgar found the insects oddly reassuring, they were the only living things he had seen in the desolation. As he travelled further, the bodies grew more in number - a band of gypsies, a travelling merchant, a wandering monk and a hedgerow apothecary. Warriors too, all fiercely armed, all dead. He was nearing the lair.

He found himself at a ruined chapel, stained glass broken, doors long rotted and gaping into darkness. He slipped the cloth cover from his shield and crept closer. Something moved; from the chapel came a rustle like dead leaves.

"Stay as you are, come no closer and down your blade," the voice sounded neither reptilian nor evil; merely old.

"The scourge is fluent in fifteen languages," came the reply. "I have lived longer than you can imagine."

"And now it is your day to die, abomination."

"Mayhap, but I would talk with you first," it said. "It has been many moons since I spoke with a sentient being."

"No, I will have none of your tricks, basilisk. "

"And you are not curious about the nature of these deeds, and why I must kill wantonly."

"You sound as if you have no choice, demon. "

"I have none, and don't confound me with your Christian bugbears. I am a caprice, a whim of a nature that is mad, blind, cruel, or all three."

"Riddles too, you wag your forked tongue well, serpent." But by now Edgar was fascinated. A loquacious cockatrice, no one had heard of such a thing in all of Christendom. "Riddle on, gorgon-seed."

"When a hen grows old, she sometimes apes her opposite gender, growing spurs and crowing. Should one of these 'cock-hens' lay an egg at the time of the dog-star, and should said egg be hatched by a toad or snake, one of my kind is born. The doubly cursed. Be glad these events conspire only rarely and we number so few."

"Aye, we are twice damned. The curse of immortality and the curse of our glance."

"Immortality is a curse?"

"Callow youth, what know you of immortality, of the grinding tedium, the blandness and the pain?"

"Pain, agony, torment beyond your feeble mayfly imagining." The basilisk's voice dropped now, almost to a whisper. "The pain is we cannot look upon another living creature without killing it. Imagine eternity of solitude and death, we cannot even look upon one of our own kind. Nothing but greyness forever and ever, even grass withers and flowers die beneath our gaze. I am a living prison to myself, hated, feared and bored by all creation. That is what it is to be a caprice."

The basilisk slipped slowly from the shadows. It seemed that all the stolen colours from the desolation resided within its scaled body. It was cobalt blue save for the metallic green feathers about its neck, the yellow beak, and its comb and wattle the colour of arterial blood. The eyes swivelled independently like those of a chameleon, their lids were slowly opening.

Edgar swung his shield of highly polished bronze and turned his head away. It was a full twenty minutes before he dared lower it again. Rasp had been correct, the basilisk's gaze was as lethal to itself as it was to any other creature. He walked over to the prone reptile. It was not the vast serpent of his imagining, but a lizard barely three feet in length. As he bent to pluck its ruff with the tongs Rasp had given him, he noticed something. Upon the basilisk's hooked beak, there was a hint of a relieved smile. 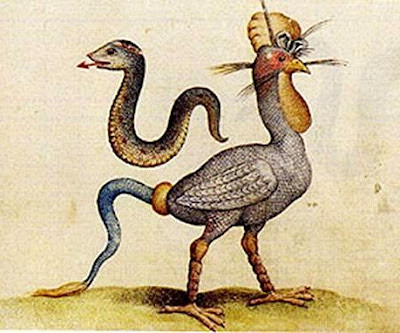 A new fiction anthology by Richard has just been published – Green, Unpleasant Land: Eighteen Tales of British Horror (CFZ Press: Bideford, 2012), available from Amazon.co.uk (click here) and all good bookstores. So be sure to check it out! 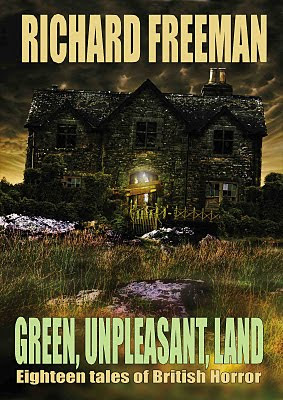