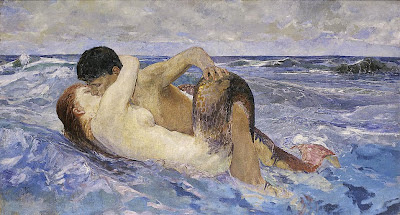 In his compilation volume Tornados, Dark Days, Anomalous Precipitation, and Related Weather Phenomena (1983), veteran anomalies chronicler William R. Corliss defined steam devils as: "Long fingers or columns of vapor rising from a water surface and swirling upward into the cloud deck". Resulting from thermal convection when the water is much warmer than the air, and moulded into shape by air currents, steam devils can sometimes occur in large arrays and yield geometrical patterns, but the reason for their remarkable stability is still a mystery.

A classic observation of steam devils, which took place at New York's Canandaigua Lake, was recorded on 4 January 1912 in Scientific American by James S. Lee:

"The surface of the lake was covered by vapor caused by the difference in temperature between the cold air and the comparatively warm water. This vapor, white mist, gathered in spots in masses rising higher than the surrounding mist. As these masses of vapor reached a height of some twenty feet they appeared to take on a rotary motion and formed themselves into columns slowly rising until their apexes met the low-lying clouds, where they spread out in a funnel shape exactly as do water spouts. The columns varied from a foot to possibly ten feet in diameter; some of them ascending in a straight line and others bent into fantastic curves by the action of the wind. I saw a great number of these mist whirls during a drive of some two hours, covering a distance of ten miles along the lake shore, and as they formed and drifted slowly across the water, illuminated by the rays of the setting sun, they were a beautiful and to me a unique spectacle."

In 1932, Science News Letter, another American periodical, published a report of a recent encounter with steam devils made by Professor Johannes Walther while voyaging in the waters around Greece during high waves and an impending snowstorm:

"The cold air striking the warm water caused numerous columns of white vapor to rise over the foamy caps of the waves. They hovered momentarily, then were caught up whirling by the wind, and as they spun away through the air it did not require any violent stretch of the imagination to see them as feminine figures dancing in filmy draperies."

Faced with this magical scene, Walther proffered a very novel hypothesis, linking these enthralling meteorological creations with a certain company of maritime maidens from classical Greek mythology. He speculated that perhaps in ancient times, sightings by Greek sailors of diaphanous steam devils hovering at the surface of the sea may have given rise to legends of the Nereids. These beautiful sea nymphs were the fifty daughters of Nereus - an early thalassic shapeshifting deity who lived in a palace beneath the Aegean Sea - and would dance upon the waves, assisting endangered sailors. 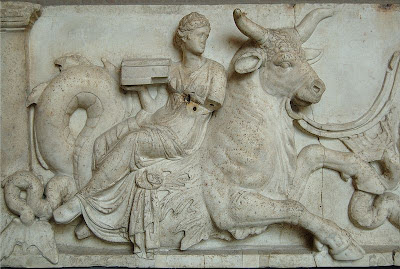 I have not seen any subsequent commentary relating to this intriguing if somewhat poetic notion. Nevertheless, I have little doubt that if unexpectedly confronted by the type of surrealistic spectacle documented here, in bygone ages the human imagination may indeed have conferred some supernatural, divine identity upon the swirling steam devils - especially in a land like ancient Greece, where it was widely believed that every facet of nature was controlled or inhabited by its own designated deities. From such beliefs were legends born.