COINCIDENCE OR COMMONPLACE? FROM REVELATION TO REACTOR

To some, coincidences are nothing but random incidents impinging upon one another merely by chance, and therefore lacking any significance or meaning. To others, they are abruptly-revealed links within a grand chain of recognition still to be forged in its entirety within the human mind. What do you think?

Consider the following example, which I came upon yesterday while browsing through Sir Alec Guinness's A Commonplace Book (2001) - a fascinating collection of eclectica and esoterica drawn from countless sources and jotted down by this celebrated British actor over the years in a couple of exercise books but not collated in published form until a year after his death - and judge for yourself.

In the New Testament of the Holy Bible, the following verses (10 and 11) can be found in Chapter 8 of the Book of the Revelation of St John the Divine:

"And the third angel sounded, and there fell a great star from heaven, burning as it were a lamp, and it fell upon the third part of the rivers, and upon the fountains of waters;

Was this truly a revelation of what would be at the end of the world, or, rather, a prophecy regarding an event of much closer proximity in time, specifically 26 April 1986?

I only ask because it just so happens that in Russo-Ukrainian, the word for wormwood is...Chernobyl.
﻿ ﻿
Just a coincidence...? 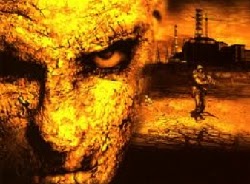