LUSMORE AND THE LITTLE PEOPLE 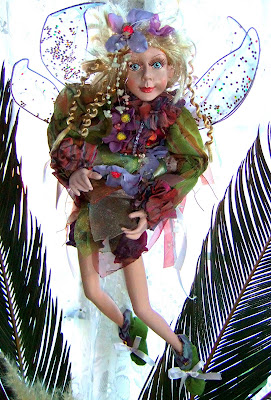 It was quite a while ago that I penned the following retelling of a traditional Irish folktale, as a sample of text for a possible book on the Little People, which would be written in the style of my dragons book. Sadly, however, the project didn't come to fruition - or at least not so far - but here, extracted from the depths of my Eclectarium, is the text sample in question, and I hope that you enjoy it.

Some fairies are solitary by nature, and these tend to be capricious and malign towards humans; a few even belong to the Unseelie Court, and are best avoided. Happily, however, most fairies are usually good-natured and can be generous to humans if treated with respect. They often live in great congregations, with splendid palaces inside hollow hills, and belong to the Seelie Court. Yet even these, known as trooping fairies, can be fickle and mischievous, especially if dealt with disrespectfully, whereupon they take great delight in punishing those humans responsible - as vividly illustrated by the following traditional British folk-tale:


Long ago, in a little village at the foot of Ireland's Galtee Mountains, lived a man known to everyone as Lusmore, on account of the sprig of lusmore flowers that he always placed in the band of his hat. Tragically, Lusmore had been afflicted since birth with a deformed hump-back, which gave him unrelenting pain and never permitted him to stand up straight. Yet despite this burden he was always cheerful, and sang happily when skilfully preparing the beautiful hand-woven baskets, hats, and other items, using rushes and dried grasses, for which he was famous far and wide.

One evening, Lusmore was walking back home, slowly and painfully as always, after having personally delivered some of his wares to a rich buyer in a neighbouring village, when, passing through a shadowy glade, he heard the most delightful singing - as if an invisible choir were present, filling the glade on all sides with melodious music. Lusmore paused, listening intently, and soon noticed that the singers were repeating the same simple theme over and over again. After a time, the singing paused, and Lusmore took the opportunity to add his own musical contribution, by elevating the theme a key with his own tuneful singing voice, creating a pleasant harmony. A few moments later, the choir began accompanying him, and the singing became even more dulcet than before.

Suddenly, the music stopped, and the glade instantaneously lit up, illuminated by what Lusmore thought at first were hundreds of tiny fireflies or glow-worms. But as he peered at them, he realised to his amazement that they were fairies - a huge assembly of gossamer-winged, gorgeously-attired fairies, whose tiny bodies glowed in the moonlight, and whose faces were as beautiful and radiant as flowers. Laughing excitedly, they told Lusmore how delighted they were with his gift to their music, and, in thanks, they promised to return his kindness with a reward of their own, by removing from his life its greatest burden.

And as they spoke those words, the entire company took wing, and swarmed all around the bewildered Lusmore like a host of will o' the wisps, enfolding him in a luminous swirling cloak of shimmering Faerie light. Startled, Lusmore closed his eyes, and felt a brief jolt of energy surge through his body, like a small electric shock, causing him to jerk upwards, involuntarily - and as he did so, he was astonished to discover that he was standing up straight, for the very first time in his life! Lusmore opened his eyes at once, and looked all about him, but the fairies had gone, with only the fading sound of their singing to confirm that they had ever been there. At his feet, however, was a strange object, like a large boulder - and to his shock and delight, Lusmore realised that this was his hump, no longer weighing down his back, whose shoulder blades were smooth and unburdened at last.

Hardly daring to believe his luck, Lusmore ran all the way home, and the next day he banged on the door of everyone's house to tell them of his incredible experience the previous night. All of the villagers were delighted for him - all but one, that is, a miserable, nasty-tempered man called Jack Madden, who was also a hump-back, just like Lusmore had once been, but was sorely lacking Lusmore's pleasant personality. Madden was jealous of Lusmore's good fortune, but as he had no spite or bitterness in his soul Lusmore ignored Madden's envy. Indeed, he was only too happy to suggest to Madden that he should go to the glade himself the next evening, and do what he, Lusmore, had done, and perhaps he too would be rewarded by the fairies there.

Despite moaning that it was a long way to go, Madden decided to follow Lusmore's advice, and spent much of the day walking to the glade, where he then waited, somewhat impatiently, until it grew dark. After a time, Madden heard the strain of sweet music wafting through the trees, a rich congregation of voices singing the same simple theme over and over again, just like Lusmore had heard. Unlike Lusmore, however, Madden had neither the patience nor the musical ability to join in. Instead, after just a few minutes, he lost his temper completely, shouting out rudely that he was tired of hearing the same theme and that it was surely time that they learnt something else to sing.

The music stopped instantly, and the glade became absolutely still. Then all at once, it was as if Madden were being attacked on all sides by a furious swarm of buzzing mosquitoes - but these were no ordinary mosquitoes. Suddenly, they illuminated themselves, and Madden saw that they were in fact a vast company of extremely angry fairies, their little faces screwed up in rage, as they pinched him, pulled his hair, tweaked his nose, flicked his ears, and screamed at him in high, piercing voices that echoed inside his head - accusing him of ruining their music, and promising swift revenge.

Overcome with fear, Madden closed his eyes and staggered away, but he tripped over the root of a tree and fell to the floor, enveloped by the swarm of enraged fairies. He felt a jolt of energy flow briefly through him, causing him to open his eyes in fear. To his relief, however, the fairies had gone, and so too, Madden hoped, would be his hump. But when he tried to stand up, his back was still hunched, and seemed even more painful and heavy than before. Gingerly, Madden felt it with his hands, and to his great horror he discovered that not only was his hump still there, but now, there was a second hump alongside it!

That was the fairies' punishment to Jack Madden for spoiling their music, and for the rest of his life he would now have to walk with two humps on his back instead of one - as a warning to everyone of what can happen if they fall foul of the Little People!