BRING ME THE HEAD OF OZYMANDIAS! 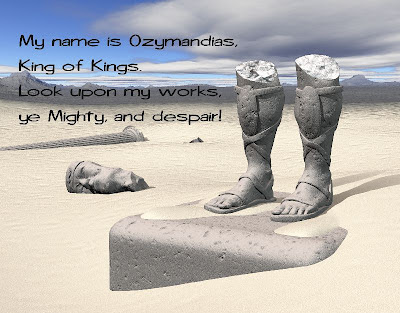 I met a traveller from an antique land
Who said: "Two vast and trunkless legs of stone
Stand in the desert....Near them, on the sand,
Half sunk, a shattered visage lies, whose frown,
And wrinkled lip, and sneer of cold command,
Tell that its sculptor well those passions read
Which yet survive, stamped on these lifeless things,
The hand that mocked them, and the heart that fed:
And on the pedestal these words appear:
"My name is Ozymandias, king of kings:
Look on my works, ye Mighty, and despair!"
Nothing beside remains. Round the decay
Of that colossal wreck, boundless and bare
The lone and level sands stretch far away".

Had I not become a zoologist, I may well have sought a career in archaeology, as I have always been fascinated with ancient civilisations and the many extraordinary monuments, edifices, and other spectacular creations that once existed in those bygone realms - of which the following example is a particular favourite of mine

Percy Bysshe Shelley’s celebrated poem ‘Ozymandias’ (quoted above in full) is a succinct but extraordinarily powerful evocation of the folly of human vanity, and the stark image of an immense wrecked statue encompassed by an empty wasteland of desert sand as conjured forth by Shelley’s strangely compelling lines has fascinated me ever since I first read them many years ago.

It was only during my visit to Egypt’s West Bank in January 2006, however, that I discovered to my surprise and delight that Ozymandias, and his giant stone head, were much more than mere figments of a poet’s imagination. 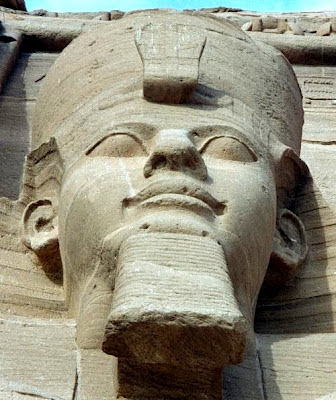 Ruling for 66 years and 2 months during the 13th Century BC, when ancient Egypt had attained the very zenith of its power and splendour, Pharaoh Ramesses II was possibly the most celebrated, and wealthiest, of all of this great country’s ancient rulers, and he used his vast riches to create an unparalleled array of monuments glorifying his existence. None was more spectacular, however, than his memorial (mortuary) temple, located in Thebes on the West Bank, across the River Nile from present-day Luxor. It was originally known as “The House of Millions of Years of Usermaatra-Setepenra That Unites With Thebes-The-City in the Domain of Amon”, but following his visit to its ruins in 1829, French archaeologist Jean-François Champollion coined a rather more concise yet no less fitting name for it – the Ramesseum.

Yet despite being dubbed the House of Millions of Years, in reality this architectural wonder lasted for a far shorter span of time, on account of its location. Tragically, it had been erected at the very edge of the Nile floodplain, and so its foundations were inexorably undermined by this mighty river’s annual inundation, as well as by neglect and desecration in later ages. Eventually, together with the gargantuan statues that it contained, Ramesses II’s magnificent temple collapsed, and in time became largely buried, with only scattered ruins to remind a modern world of its long-bygone glory. 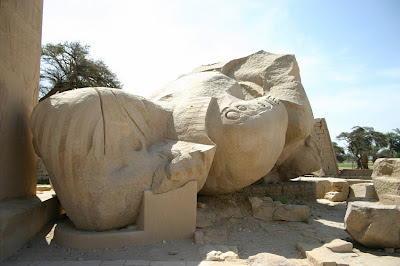 The surviving head and shoulder of the Ozymandias Colossus (Steve F.E. Cameron/Wikipedia)

Among its now-fallen statues was an immense stone giant dubbed the Ozymandias Colossus, which weighed over 900 tons and formerly stood as tall as Memnon’s twin counterparts documented earlier in this chapter. Today, however, only its massive head, hands, and feet remain. These shattered relics, the pathetic remnants of Ramesses II’s most grandiose attempt at self-glorification, are what inspired Shelley’s famous sonnet, though the “two vast and trunkless legs of stone” were his own invention, as no such relics exist here today. 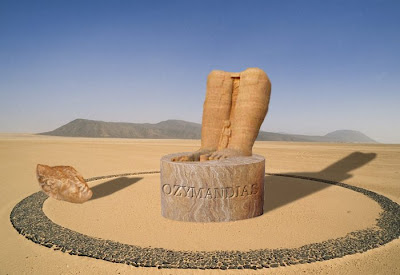 As for the memorable name, Ozymandias, this was actually a mis-transliteration from Egyptian into Greek - by 1st-Century-BC writer Diodorus of Sicily - of the first part of Ramesses II’s throne name, Usermaatra Setepenra. This appears as a cartouche on the statue’s shoulder, and can still be seen today as shown in Steve Cameron's photograph included earlier here. 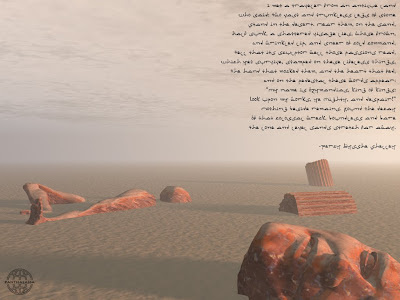