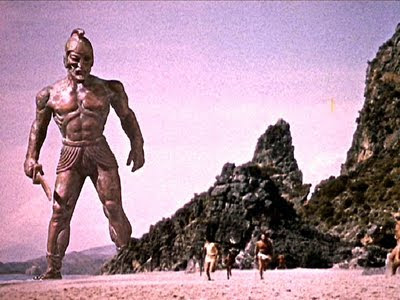 Talos, in 'Jason and the Argonauts' (1963) (Ray Harryhausen/Columbia Pictures)

In classical Greek mythology, the deity who drove the sun chariot across the sky each day was not actually a god but rather a titan, called Helios, whose most famous artistic representation was none other than the Colossus of Rhodes - an immense statue created by a renowned sculptor known as Chares of Lindos, standing 110 ft tall, covered externally with burnished sheets of bronze, and deemed to be one of the Seven Wonders of the Ancient World, even though it stood intact for just 56 years during the 3rd Century BC before being felled by an earthquake.

Interestingly, however, long before this spectacular work of art had been created, its subject, Helios, had already become associated with a bronze giant, but this one was of a much more animate nature. In the dialect of Crete, Helios became Talos - and according to Cretan legends incorporated into classical Greek mythology, Talos was a gigantic living man cast entirely from bronze (or brass in some versions) by the fire god Hephaestus. Talos contained a single internal vein running from his neck to his feet, and was sealed at one ankle by a huge bronze nail. This vein was filled with ichor, a magical substance present only within the very blood of the gods themselves, thereby rendering Talos immortal.

After Zeus had seduced the maiden Europa while assuming the form of a great bull, he carried her off on his back across the sea to the island of Crete. When they arrived there, he placed Talos on guard, to ensure that no-one abducted her, and Talos thereafter ran around the island three times every day to keep a constant watch for anyone who may try to rescue her, hurling huge boulders out to sea at any approaching ship. Eventually, Europa became Queen of Crete, but Talos remained, ever vigilant. According to a different version of the Talos legend, he was given by Hephaestus to Minos, King of Crete, as a gift, but once again he guarded the island by running around its perimeter three times a day. 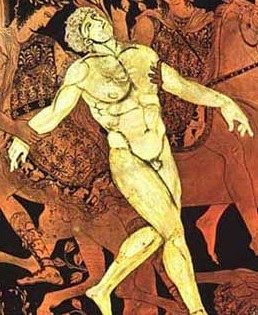 Athenian vase from c.400-390 BC, depicting Talos and the Argonauts, held at the Museo Jatta at Ruvo in Italy

One of the creepiest scenes in any fantasy film appears in ‘Jason and the Argonauts’ – a thoroughly enjoyable, albeit decidedly Hollywoodised, treatment of the epic Greek legend, filled with classic stop-motion special effects created by the master of screen monsters, Ray Harryhausen. The scene in question is when Jason and his fellow Argonauts aboard the Argo reach the island of Talos, who seems to be nothing more than a giant bronze statue in crouching position, on top of a massive chamber packed from floor to ceiling with untold treasures.

Ignoring Jason’s strict instructions not to take anything from the island, two of the Argonauts, Hercules (=Heracles) and Hylas, plunder the chamber, but as they re-emerge and look up at the enormous 'statue' on top of it, to their horror it suddenly turns its head and looks down at them! And as they watch, terror-stricken, Talos swiftly comes totally alive and clambers down from the chamber, poised to step on them like tiny ants as they flee before him, racing back to their ship to alert the other Argonauts of the monster that their greed has unleashed upon them all. Happily, Talos is rendered immobile once more, when, guided by the voice of the goddess Hera, Jason successfully prises out of his heel the cork that retains his body's vital ichor, which gushes out from his vein, bringing Talos's immortality to an abrupt end. 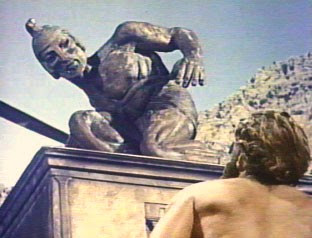 When Talos awakens, in 'Jason and the Argonauts' (1963) (Ray Harryhausen/Columbia Pictures)

In the original Jason myth, conversely, Talos himself removes the ichor-retaining nail from his ankle after being bewitched by the sorceress-priestess Medea (who was accompanying Jason and the Argonauts back home after they had seized the Golden Fleece at Colchis), and thereby brings about his own death.

Unlike the Colossus of Rhodes, which unquestionably once existed, there is no evidence whatsoever to suggest that Talos was ever anything more substantial than a figure of legend. Nevertheless, as an animate metallic humanoid entity in the annals of world mythology, he may well lay claim to being the world’s first robot (long before the likes of such early modern-day counterparts as 'the Man-Machine' in Fritz Lang's classic 1927 movie 'Metropolis', for instance) – were it not of course for the fact that in his murderous pursuit of any hapless visitors to his island domain, he clearly paid scant regard to Isaac Asimov’s celebrated Three Laws of Robotics! 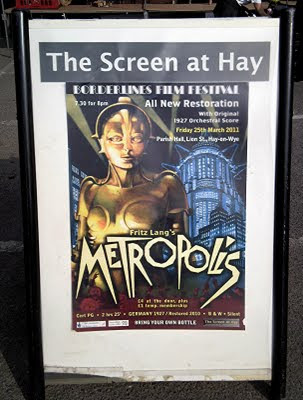 Poster advertising a screening of 'Metropolis' in Hay-on-Wye, the Welsh 'town of books', in March 2011 (Dr Karl Shuker)

This post is excerpted from my book Dr Shuker's Casebook: In Pursuit of Marvels and Mysteries (CFZ Press: Bideford, 2008)